NightLink: Will the Packers Be In the Mix in 2009?

Share All sharing options for: NightLink: Will the Packers Be In the Mix in 2009? 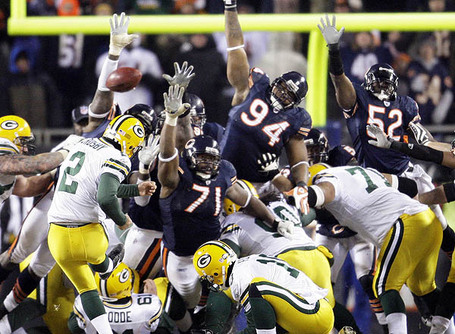 This was the first year in ages that I missed the NFL draft, and today I have been having a crash-review of all of the hoopla.  A ton of stories came from the draft, and we have several new Bears players that we hope will make a solid contribution to the 2009 season.

But, one thing in particular jumped out in my mind, and I haven't been able to quite figure it out... Did the Packers just get good?

All around the NFL world, the Bears and the Vikings have been said to have the best shot at winning the NFC North.  And with the 6-10 Packers and 0-16 Lions last year, how could anyone argue that either could make a run in 2009?

But what keeps popping up in my mind is how good, really good, the Packers could be this year.  Already having a roster made up of Aaron Rogers, Ryan Grant, Donald Driver, Greg Jennings, Aaron Kampman, Nick Barnett, AJ Hawk , and the additions of BJ Raji and Clay Matthews in this year's draft, the Packers might try and sneak up on some folks this year.

With the 3rd easiest schedule in 2009 (games against the Bengals, Browns, Lions, Bucs, 49ers), the Pack could feasibly win 9 or 10 games... maybe more.  I don't know how good the Packers will be, but I do know that game #1 on September 13th might be a little more important than we think.