Share All sharing options for: QuickLook: Hester, Manning, and KR/PR 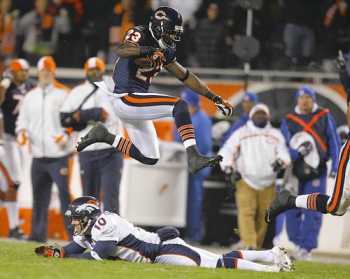 Over the last several weeks, the debate over how to best utilize Devin Hester has popped up on more than a few occassions.  Hester can contribute at wide receiver, kick returner, and punt returner... and has proven on many times he can be a game-changer any time he touches the football.  It could even be argued (and it has been) that Devin Hester was the main reason the Chicago Bears went to the Super Bowl in 2006.

A while back, I wrote a FanPost that focused on the Bears Special Teams rankings and stats since 2005.  But for the purpose of this post, let's take it in another direction...

After returning from 2 days of sitting out of training camp, the Bears awarded Hester with a 4 year contract, worth up to $40 million.  He was then converted to wide receiver, while still contributing to special teams.  His numbers in 2008:

In the meantime, Danieal Manning lead the NFL in kick returns in 2008:

So, after navigating through all of the statistics, let's bring out some other points to the table:

- Devin Hester's play-making ability should warrant him touching the ball as many times per game as possible, including KR, PR, and WR.

- Devin Hester's contract should force him into a full-time WR role.

- Devin Hester should go back to being solely used on ST... after all, he might be the best ever at KR/PR.  He single-handedly changed games, even when he didn't touch the football (teams kicking out of bounds).

- Devin Hester should be used as trade-bait to try and score another big time wide reciever... he'll never be a true #1 WR, and he is eating up way too much money as a ST player.

How valuable is Hester to the Chicago Bears?

How should he be best utilized?

How much production should we expect from him in 2009?

Who should be returning kicks and punts for us this season?