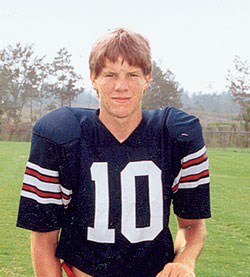 What would a good offseason be without a Brett Favre soap opera?  Why should we care if Favre chooses driving a tractor over throwing a football?  Will we still be wondering whether Farve will be suiting up in the year 2052?

Brett Favre for years has been an icon in MSM, and until he either can't walk anymore, or both of his arms fall off, there may always be speculation as to "Can he still play?".

Regardless, there are a couple of bits of information floating around the internets that pertain to just this topic:  Is Brett really, really, for real I promise this time, really retired?  Or might he end up in Minnesota?

I will not go into the timelines or promises, or changes-of-mind in the Farve saga over the last couple of years.  And we all know that in the last few weeks, Farve and his agent, ever-trustworthy Bus Cook, have said basically, "Naw, for real folks, retirement is the decision."  But...

Apparently Farve had to ask twice for his "unconditional release" from the Jets.  Why, if he is reallyreallyforsure retired, would he ask?

Also, and this is some crack reporting by PFT, there has been some Minneapolis-Hattiesburgh air traffic in the last couple of days.

It probably means nothing.

But, let’s face it, Hattiesburg-Laurel Regional Airport is hardly a major hub of transportation.

Only five flights arrived there today, and only six departed.

One of the arrivals came from Minneapolis, and one of the departures headed back there.

And flightaware.com also pointed out that the jet that was making the flights was the exact type of jet owned by Vikings owner Zigi Wilf.

Could the Vikes try and make a run for Favre?  Would Farve consider returning to the North?  I have hated the Favre drama over the last couple of years, and this only interests me because it could affect the NFC North... but still.  Could this realistically happen?

The Jets acceded to Favre's demand this week. General Manager Mike Tannenbaum released a statement that included this quote from Favre: "Nothing has changed. At this time, I am retired and have no intention of returning to football."

Those three little words -- "at this time" -- make it official: Favre plans to play again.