A story we've all heard mentioned: Vanderbilt aide said the Cutler told him he wanted to be drafted by Chicago in 2006.

Brad Biggs elaborates on his weekend argument that the Bears need to pick a receiver in the 2nd round.

Jay Cutler was on hand for the voluntary workout yesterday. Also, Ron Turner and Cutler had lunch together on Sunday night and talked X's and O's.

Larry Mayer asked fans how they felt about the Cutler trade and received over 1,000 responses.

Sporting News breaks down the aftermath of the Cutler trade and addresses what we need to do in the draft to complete our team.

Pick the biggest Bears 1st-round draft bust of all time.

Kyle Orton and Chris Simms will compete for the QB job in Denver. No word if quarters will be involved.

2) Something much more witty that you would think up 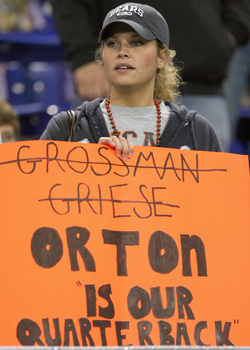 Speaking of Mike Florio, remember what I wrote yesterday regarding the questionable reporting of NFLDraftBible.com? Well, NDB's CEO is backing their reporting. It's either a confident move or a really dumb bluff. Either way, this is turning into a huge fiasco.