The Bears Den is in debt to Brad Biggs, since he has five stories on here.

As long as we're talking of Brad Biggs's work, here's his take on whether the Bears will move up in the draft.

You're not sick of Brad Biggs yet? Fair enough....he details two WR prospects under the radar: Brandon Tate and Kevin Ogletree. Click on Tate to see my breakdown of him.

You still want more? Brad Biggs talks with Mohamed Massaquoi after his private workout with the Bears.

David Haugh breaks down which current Bears would be good in a political office on the eve of former Bear Jim Schwantz being elected as the mayor of Palatine.

Scout.com writes about Orlando's wish to play LT and making Chris Williams move over instead.

Larry Mayer details the importance of the NFL Combine and pro days.

Haven't gotten your Cutler jersey yet? Click here to do so.

Speaking of which, haven't gotten your Cutler fill yet? On the official Bears website, they have a full page devoted to Sir Jay.

Orlando Pace has been recruiting Torry Holt to play in Chicago. 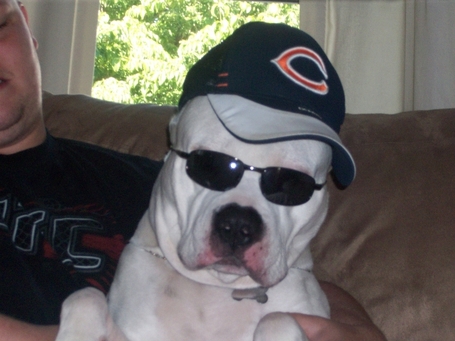 After Deuce McAllister filed for Chapter 11 bankruptcy on one of his dealerships, Nissan has decided to take the cars off of his lot.

A look into Nate Davis's draft stock, which has steadily tumbled since the combine.

Teams are now using "ghost" profiles on Facebook and MySpace to check out prospects.

John Clayton speculates on the likelihood of Ocho Cinco being traded from the Bungles. Supposedly, the Bungles want a 1st and 3rd round selection for him. Good luck with that, Cincy.

GB: Tennessee head coach Lane Kiffen kicks player off of team for missing practice... for attending the birth of his child.