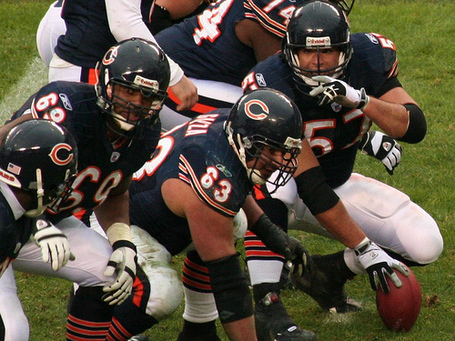 The Chicago Bears offensive line will have a new look in 2009, thanks to the signings of Orlando Pace, Kevin Shaffer, and Frank Omiyale.  We also saw John St. Clair go to the Browns, and Chris Williams is expected to be healthy.  Unless we sign an instant starter in the draft, our OLine is taking form:

This will leave Kevin Shaffer as a swing tackle, and Josh Beekman as depth at guard and center.  Shaffer may compete with Williams at RT, but Williams is expected to start.

This is drastically different than last year's OL, who did a respectable job, but was obviously not what we needed.  But, an early camp provided our coaches with a good evaluation of where we stood, and now we are looking at a big improvement.

With the upgraded line, Matt Forte and Kevin Jones should both be very productive, and newly acquired QB Jay Cutler should have more time in the pocket than QBs of our recent past.

The foundation of a football team is rooted in the offensive line, and for now we seem to be headed in the right direction.  There are a couple of good OL prospects that should be available when we pick in the 2nd round of this year's draft, but it could be reasonable to assume that we will use that pick on a wide receiver.

How do you feel about the current state of the offensive line?  Do you think we have the players on our roster right now that can get it done this season?