Share All sharing options for: Simeon Rice Wants a Job 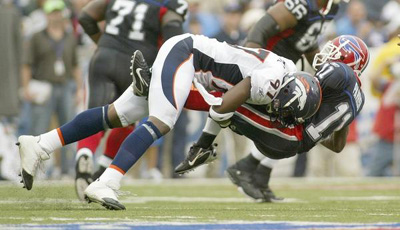 I have on a few occasions taken it upon myself to generate some unsubstantiated rumors.  I know most rumors are that, but probably moreso when I do it.  I had some succes with a post about Jon Kitna last off season I believe.

Simeon Rice is not currently in football, but he wants to be and seems willing to do whatever it takes to get back in.  He has used Chicago's name once before now he does it again, this time name dropping Rod Marinelli's name.

“That’d be a nice situation, you’ve got Rod Marinelli up there and it’s a good situation if it can get around that way,” Rice said.

He goes further to say that his agent has said there are a few interested, but I think that is Rice and his agent trying to drum up business.  Rice has been on every radio station he can get on selling his skills.  If a team was interested, they would have hosted him already.

From Chicago's standpoint, Rice and company should take a look at our roster.  Whether you like them is another question, but the Bears are stacked on the defensive line.  The only castaways we currently can guess at would be Dvorcek or Ogunleye.  Rice is a defensive end, so Dvorcek being cut wouldn't do him any good.  As far as Wale, why replace a high priced vet with an even older vet who still thinks he deserves a decent contract?