Share All sharing options for: Greg Olsen in the Tight End Rankings 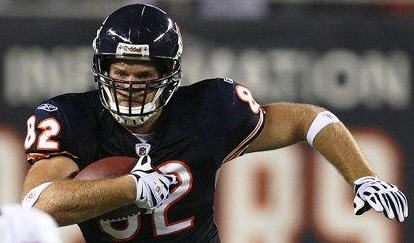 SpotingNews.com has a list of the best TEs in the NFL. Greg Olsen shows up at #13:

13. Greg Olsen, Bears. There was no sophomore slump in '08. He showed great improvement and became a playmaker, particularly in the red zone, posting five touchdowns. After failing in several attempts to upgrade the wide receiver corps, Olsen remains the Bears' best and most reliable option in the passing game. His statistics are sure to improve with QB Jay Cutler

Do you think that is fair considering he hasn't been playing long?  Those listed in front of him are: