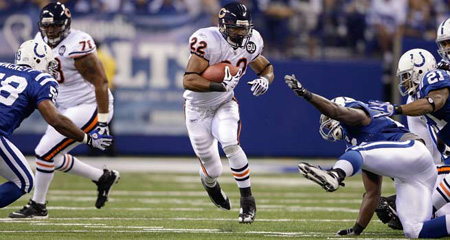 NFL.com has their fantasy football rankings up and Matt Forte has found himself near the top of the list.  In the Top 100 players, Forte comes in at #2 behind Adrian Peterson.  Obviously, Forte's value increases if it is a reception league.  I'd imagine also having a QB ranked in the Top 10 (#9), something that is completely foreign to Bears fans, helps those out.

Take a look at the top 10: Is Forte ranked correctly?

Robbie  Gould: #16 kicker (I think Gould got rooked here unless they are assuming he gets less FGs with Cutler in town)

Chicago D/ST: #11 (I think this one depends on what stats are used.  The Bears will be near the top of takeaways and the return game)