Share All sharing options for: Are Opposing Wide Receivers Intimidated by Charles Tillman? 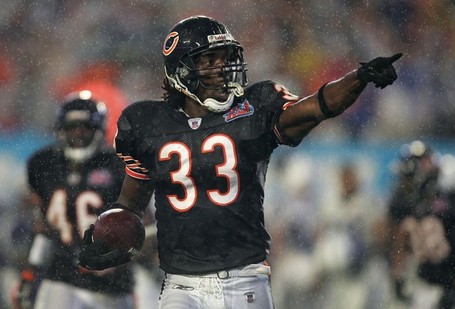 Statistics have always intrigued me... a lot of people don't put too much merit into random stats, but I happen to think they can be very helpful in discovering trends.  And this article possibly does just that.  It says that opposing wide receivers of Charles Tillman dropped more passes in 2008 compared to opposing WRs of any other cornerback in the NFL.

Of the 113 passes thrown in his direction, 10 were dropped. For the purposes of this study, FO defined a drop as an "uncontested pass the receiver should have caught." Imperfect passes or those knocked away by simultaneous contact didn't count.

The article goes on to wonder what reason could be behind the stat.  Is Tillman intimidating, or could it be his well-known ability to strip the ball?

It makes intuitive sense, and I'm sure there have been instances when a receiver loses concentration because he's aware Tillman is preparing to swipe at the ball. But Football Outsiders' study offers no evidence to suggest Tillman has consistently "forced" receivers to drop the ball during his career. In 2007, for example, receivers dropped four of 93 passes against him, which finished below the NFL average that season.

Whether there is merit to be had from this statistic is up in the air.  But as a Bears fan, I am hoping that this is indeed a trend that continues into the 2009 season.  With the current state of our defensive backs, we will need all of the help we can get.