It seems like Chicago Bears General Manager Jerry Angelo has been in the media a little more often since the trade for Jay Cutler.  This time, he sits down with The National Football Post's Matt Bowen to discuss Cutler, divisional opponents, and different aspects of our football team.  It's a really good read, and I'll pull a few highlights from the article as an appetizer. 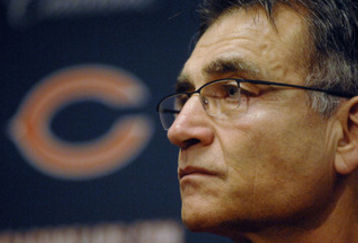 On the scrutiny that the Bears wide receivers, and Angelo himself on not going after a high-profile WR, have been under lately:

Our assumption is that it starts with the quarterback, and not the wide receivers," he said. "All you have to do is look north and see what Favre did with his receivers in Green Bay. I don’t care who you gave Favre because they always looked good.

"We have a good receiving corps that complements one another.  (Juaquin) Iglesias gives us that big guy across the middle.  When you talk wide receivers, you have to count the tight ends," he said, something he discovered when talking with Patriots coach Bill Belichick about the struggles the Patriots had trying to contain Chargers TE Antonio Gates.

"He is a special coach who drives these guys, pushes the envelope, and guys respond to that," he said. "All great coaches are great teachers, and they get guys who want to please them."

Angelo also mentions that Offensive Coordinator Ron Turner also wants to find a niche for Garrett Wolfe.  What that niche is, who knows.  Angelo is excited, as many of us here are, about the RB duo of Forte/Jones, so I'm not really sure how Wolfe will play into things. 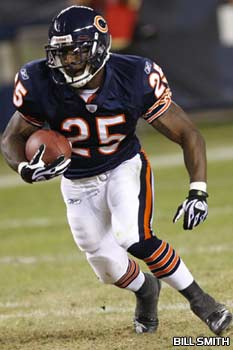