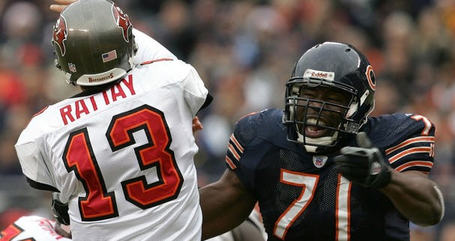 Israel Idonije is in the last year of his contract. He is due to make 1.75 million. He is ready for his new deal. His agent, Drew Rosenhaus has reached out to the Bears, but he expects them to wait until the end of the 2009 season.

This one worries me. Idonije is our most versatile defensive linemen. He has been moved all over the line, been asked to gain and drop weight and has performed where ever the Bears put him. He has beat DMS.

The problem is he isn't a starter. I'm worried that Rosenhaus will price him out of our range and the Bears will have to eat a big contract for a non-starter or let him go. He will have suitors if he hits the market.

I'm thinking perhaps the Bears should put a reasonable offer on the table while they still have him instead of letting another team set the market for him.