Is Tommie Harris on the Hot Seat?

Share All sharing options for: Is Tommie Harris on the Hot Seat? 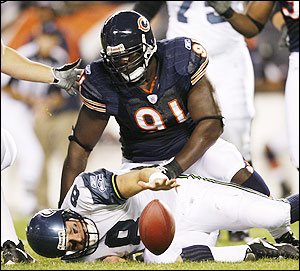 Earlier, we brought you a story about Israel Idonije wanting a new contract.  The Bears are expected to wait until the end of the 2009 season to look at that, and it could be because they want to see first what Rod Marinelli can do with our current starters on the DLine.  That being said, ESPN thinks that veteran defensive tackle Tommie Harris is on the hot seat  this upcoming year.

Defensive tackle Tommie Harris is only one year removed from an eight-sack season and could personally return the Bears to defensive prominence if he can reestablish himself as a premier interior pass-rusher.

I know a lot of us are excited about the addition of Marinelli to our coaching staff, and are eagerly awaiting the opportunity to see the impact he can have on our pass rushing scheme.

Harris is a three time Pro Bowler, and signed a 4 year/ $40 million contract last summer with the Bears.  He has exactly what Lovie Smith likes to see in his defensive tackles- good speed and athleticism to get to the quarterback.

Do you think that Harris can return to his pre-2008 form?