Share All sharing options for: Veterans and Rookies Workout For First Time 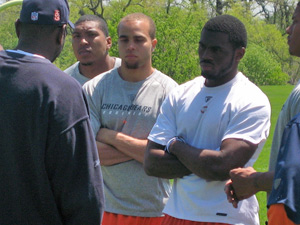 Despite talk that Jay Cutler is the new king of Chicago, it was Brian Urlacher, incumbent king, who was getting noticed at Bears OTAs, the first that put the veterans and rookies on the field at the same time.

The third-round draft pick from Oklahoma was headed into the players’ lunchroom when he noticed that middle linebacker Brian Urlacher was walking toward him. Iglesias deftly moved to the side, allowing the six-time Pro Bowler to pass through the door unimpeded. "It feels good [to be working out with the veterans]," Iglesias said. "I feel a part of the team now, coming out here and running around a little bit and getting to know people. But [when seeing someone like Urlacher approaching him], I’m going to step to the side."

Marcus Freeman also had to do a little extra to focus in meetings sitting with both Urlacher and Briggs.

“You try to hold back from looking in awe and saying, ‘Man, that’s Brian Urlacher and that’s Lance Briggs,’ and instead saying that those are the guys I need to learn from and to see what makes them so good,” Freeman said. “It was good to get out there and get a couple laps with the veterans here.”

Iglesias also commented on the speed the ball is delivered from Cutler...

“It was definitely coming a lot faster than what I’m used to catching, but you just have to adjust to it,” Iglesias said. “He’s a good quarterback and a good leader, and I’m looking forward to working with him.

It is just good to hear the words QB and speed of the ball being thrown in the same sentence.