Share All sharing options for: NightLink II: Pisa Tinoisamoa to Visit the Bears 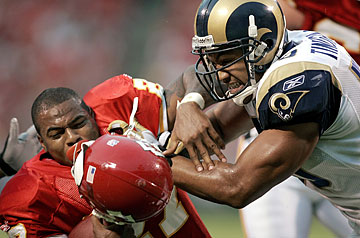 An interesting piece of information from Brad Biggs this evening: former Rams linebacker Pisa Tinoisamoa is scheduled to make a visit to Halas Hall on Wednesday.

While linebacker does not look like a need area, the veteran began his successful career in St. Louis playing for Smith and linebackers coach Bob Babich. The Bears are interested enough to have him in for a visit to Halas Hall Wednesday, according to an NFL source. That trip that coincides with the first OTA of the offseason.

One reason cited for his departure in St. Louis was his size. Listed at 6-1, 240 pounds, reports stated he played closer to 225 pounds last season. Smith generally looks for undersized linebackers in his scheme, and the addition of Tinoisamoa would create even more competition at strong-side linebacker where Nick Roach is expected to battle Hunter Hillenmeyer for the starting job. Hillenmeyer was the starter for the first seven games before Roach replaced him. Right now, it stands to be one of the few true position battles in training camp. Adding Tinoisamoa would give Smith even more depth at the club's position of strength.

Pisa has already visited the Bills, and is also scheduled to visit the Eagles.