Share All sharing options for: Brian Urlacher Still On Top 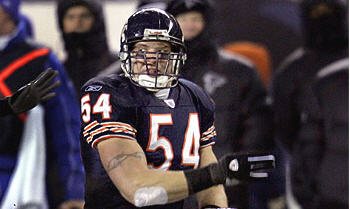 1. Brian Urlacher, Bears. He recorded 90-plus tackles for the eighth time in his nine-year career but didn't make as many impact plays in '08. That has a lot to do with the lack of production from the defensive line. That will change this year, and Urlacher will play with renewed energy after being left off the Pro Bowl roster.