Despite Israel Idonije and agent Drew Rosenhaus wanting a contract extension for the backup defensive end, Idonije is still showing up to work and giving it his all.  He is also shedding some pounds off of his weight. 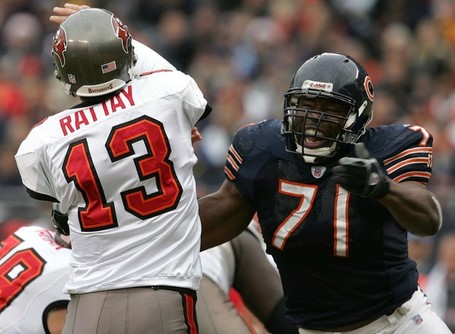 Idonije said he plans to report to training camp in late July at 265 pounds and intends to remain at that weight for the 2009 season.

The 6-foot-6-inch Idonije topped off at 306 pounds last season as the Bears used him at defensive tackle. He was gaining weight at this time last year.

It is no secret that Defensive Line/ Assistant Head Coach Rod Marinelli likes a ton of speed coming off the ends to get pressure on the quarterback, and he likes what he sees from Idonije.

Movement is so important in this scheme – quickness and speed – and (Idonije) has that. He can really fly. He’s got good movement, good balance. I’m excited about him

Idonije recognizes the fact that the Bears will reward their players when they earn it, and he says that he plans on doing just that in 2009.

"I’m going to come in and do what I’ve always done and that’s just work and give everything that I have,’’ he said. ``This year is no different.

``I love Chicago, and I think everything will work out fine. But it also starts with me and my production on the field. I have to put myself in position where I can shine and make plays.’"

Well big fella, we are certainly rooting for you this year, along with the rest of your peers on the DLine.  Last year is something that we would like to easily forget... 2009 will hopefully produce plenty of pressure on the QB, making a much easier job for our secondary (who aren't exactly instiling a lot of hope right now).