Being constantly hammered by Chicago Bears fans and media, Dusty Dvoracek is trying to look beyond the injury-plagued seasons and move into a productive role with the defense. 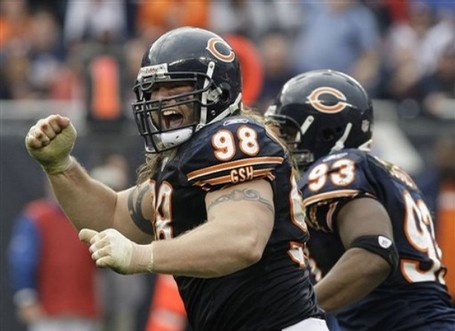 It’s frustrating and I’m sick of it, and that’s why I feel this is going to be a year of injury-free football," Dvoracek said. "It’s obviously not the way I wanted to go about my career in Chicago, and as frustrated as I’m sure the fans and the media seem to get with me, I get just as frustrated.

But that’s over. That’s already happened. I’ve been hurt. I’m healthy now and that’s how I’m looking at it. If I dwell on it, nothing good’s going to come of that. I’m just excited that I’m to a point where I’m healthy and ready to go and I have a great coach like Rod Marinelli to make me become the player that I’ve felt I always could be and that I’m going to be, so I’m just excited about that opportunity

Dusty also mentioned how he feels about Rod Marinelli.

He’s the best teacher of football I’ve ever been around in my life,” Dvoracek said. “He’s so knowledgeable and he does such a good job of explaining what he’s talking about to players and breaking everything down. He tapes every single thing we do, goes over it and teaches us how to be better players.

“He hammers the pass rush like nobody ever. We work pass rush every day over and over. Not that the coaches before hadn’t done a good job. I just think he’s amazing.”

A lot of Bears fans will think it is amazing if Dvoracek can make it through a 16 game season.

At the time of his injury last season, Dvoracek led all Bears linemen with 40 tackles. He registered 17 tackles in a four-game span, but acknowledged that he then struggled in back-to-back losses to the Titans and Packers.

“Everybody has a few bad games here and there,” Dvoracek said. “But as a whole, I felt that I’ve played at a pretty high level in the NFL when I’ve been healthy. One thing I take as a positive is that I’ve started 13 games in three years. I haven’t taken three full seasons of the pounding.

The article also mentions that Dusty has a couple of newspaper articles that were writing him off taped to his locker that he is using for motivation.  With all of his optimism, and him looking for motivation, I bet he could peruse some of the comment sections here at WCG and get all the motivation he could need.

Personally, I expect nothing from Dusty D.  So it will be an added bonus if he can actually get on the field and contribute in 2009.  Sounds like his head is in the right place... hopefully his body can stay there too.