NightLink: Is Orlando Pace a Gamble for the Bears?

Share All sharing options for: NightLink: Is Orlando Pace a Gamble for the Bears?

Last season, the Chicago Bears offensive line did not perform as poorly as a lot of people expected them to.  But heading into this offseason, we knew that it was something that needed addressing pretty badly.  As free agency opened this year, it seemed like it was going to be another hibernation period for the Bears that we all knew too well. 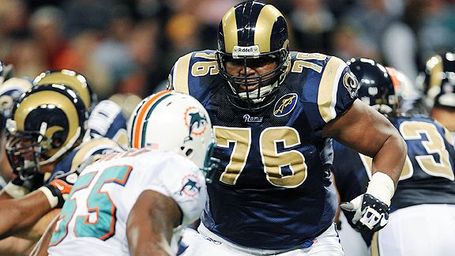 Then, things started happening.  And as we look back, we can truly say that our favorite football team was very proactive in overhauling our OLine.  We let John St. Clair leave town, and added Orlando Pace, Frank Omiyale, and Kevin Shaffer.  Plus, Chris Williams is expected to be 100% healthy.

All four of those guys have question marks around them, especially regarding Orlando Pace.  And the biggest question is whether Pace can stay healthy enough to help Chicago win football games.

"It's a funny thing about injuries," he said. "Once you come back from them, you're just happy to have a chance to be on the field again. That's how I felt last year, and I also feel good now. I evaluated all those [medical questions] before I came here."

Pace admits that he seriously pondered his future. He even talked about retirement with former Baltimore Ravens left tackle Jonathan Ogden when the two ran into each other in Las Vegas last summer. At that time, Ogden recently had retired after a 12-year career that included 11 Pro Bowl appearances. Though Pace wanted to know what drove Ogden from the game, Pace also left that conversation feeling as if he and Ogden were in different places.

Said Pace: "Jonathan told me he just felt like it was time for him to go. He said he had been dealing with a foot injury and that could be hard for an offensive lineman to handle. I also didn't see myself as a guy who was going to go out as just another player that the St. Louis Rams released. I felt like I had more to give."

It seems like most of the optimism I hear about Orlando Pace comes from Bears fans.  Most people who are not fans seem to think the same thing:  that Pace is washed up and only a shell of his former self.  One thing is for sure, Ron Turner is cheerleading for Pace:

"Orlando is such a great player that he commands respect as soon as he walks into the huddle," Turner said. "With him and another veteran like [center] Olin Kreutz, you've got two guys who really know how to train and study. It can only help our younger players get better when they're around people like that."

Do you have confidence that Orlando Pace will be able to stay healthy and contribute significantly in 2009?