Share All sharing options for: Bears Creating Confusion, Not Production at Safety 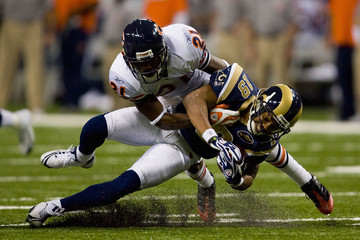 We have heard many theories, rumors and speculation on what they Bears should do with their issues at the safety spot.  Two of those involved moving either Charles Tillman or Nathan Vasher to that spot.  Well, throw Corey Graham's name to that list.

In an interview discussing the the secondary, Lovie Smith dropped Graham's name into the mix:

He proceeded to rattle off the names of the safeties on the roster -- Payne, Craig Steltz, Josh Bullocks, Glenn Earl and Afalava -- before adding two more players who figured to have roles elsewhere.

''We have all of those guys in the mix, and we still have Danieal Manning,'' Smith said. ''Look at other players. We have Corey Graham.''

Ok, I'm all for putting the best players on the field, but the Bears are playing musical secondary way too much.  They are creating an atmosphere of confusion and uncertainty among the players.

Let's say Graham does well enough to take over the safety spot.  Then in game 3 Nathan Vasher goes down for a few games (hard to imagine, I know). Do we leave Graham at safety and let Trumaine McBride fill in or are they going to move Graham back over to corner and bring Steltz back up?

You have to have at least 3 good corners in this league.  If you are playing a team like Indianapolis, you need more.  If you are the Bears you need about 6 to cover injuries, but you cannot keep moving players around between positions.  You have to give a young guy his spot and let him learn how become a good NFL player at that spot.

Danieal Manning could be a Pro Bowler at some spot for all we know...they just won't let him stick to a position.