NightLink: Super Bowl in London, and Favre in Minnesota?

Share All sharing options for: NightLink: Super Bowl in London, and Favre in Minnesota? 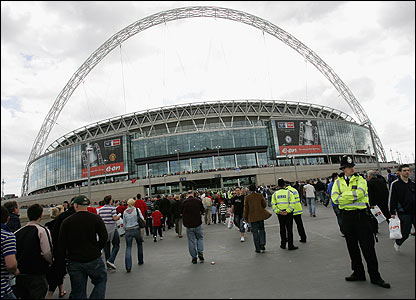 NFL commissioner Roger Goodell has been ever-interested in globalizing the league, having already played games in 2007 and 2008, and scheduling one in 2009.  It looks like London is looking into the possibility of bringing the Super Bowl to Wembley Stadium.

London has launched an audacious bid to stage the Super Bowl within the next eight years, a move that would see the United States' biggest sporting event played overseas for the first time, the Sunday Telegraph has reported.

According to the newspaper, representatives from the Mayor of London's office and Visit London, the city's official visitor organization, have received assurances from the National Football League of a commitment to hold the event in London.

Apparently, London is looking at 2014, 2015, or 2017 for trying to host the event, although Goodell said last week that he is not interested in moving the game overseas, and NFL vice president of corporate communications Brian McCarthy has also denied the possibility.

And more fuel for the Brett Favre fire, one writer at Fox Sports has listed the key developments that have emerged in the ongoing saga.

Favre was granted his release request by the New York Jets rather than remaining on the team's reserve/retired list. He issued a statement claiming "nothing has changed" and "at this time, I am retired and have no intention of returning to football." So why ask for your release? Plus, with his history of retirement flip-flopping, the use of "at this time" is particularly intriguing.

The Minneapolis Star-Tribune reported that Favre has recently spoken with Vikings offensive coordinator Darrell Bevell, a good friend from their days together in Green Bay.