NightLink: Kyle Orton Settles In to His New Home

Share All sharing options for: NightLink: Kyle Orton Settles In to His New Home

In the wake of the Jay Cutler/ Kyle Orton trade, we have heard from Jerry Angelo, Brian Urlacher, Cutler, and many other Bears personnel on their thoughts of how things came to fruition.  One person we haven't heard from is Orton.  Until now. 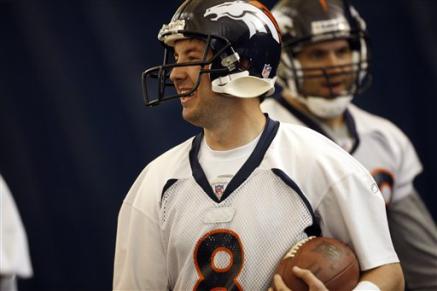 After grinding away in 14-hour days for the first few weeks and immersing himself in the new playbook, he's not working as late now that his wife, Bridget, has joined him. Just as Cutler is settling in with the Bears, Orton is getting comfortable in his new surroundings.

Having been given the week off by coach Josh McDaniels, Orton has had time to sit back and process all of the events of the last few weeks.  He said the most difficult part was having to leave his teammates behind.

''I was well-established in the community, and from that aspect it was tough,'' Orton said. ''But career-wise, I was just so excited.''

''My entire goal, and the only way I went about it, was to win football games,'' he said. ''For the most part, I did a pretty good job of that. I don't know [if he ever got credit for being 21-12 as a starter]. I'm proud of what I did back there.  'Right now, I'm just focused on the future. It's going to be the start to the second half of my career.''

Jerry Angelo is quoted as saying that he didn't want it to seem like he didn't believe in Orton, but realizes that it probably does.

''Let me just say this: We've had good quarterback play,'' Bears general manager Jerry Angelo said Monday. ''We've won here. I don't want it to sound like -- and I know it does -- when Cutler comes in here, it's like nirvana, [as if] we've never had anybody. When we went to the Super Bowl, we were the second-highest-scoring offense in the NFC.  We haven't had good quarterback play here on a consistent basis, year in and year out. That was our goal. So I don't want it to be like it's been eight years of just bare. When Jim Miller was here, he gave us good quarterback play. We've done it probably as well as anybody without having a marquee QB, and how many real marquee QBs are there? Six to 10 in the whole league?''

Whether Kyle Orton is a part of that group, Orton says time will tell.  That said, it was Orton who was able to make the trade happen to begin with.  The Broncos wanted Orton, and once they were locked in on him, other teams like the Redskins quickly fell out of contention.

Many Bears fans wish Kyle Orton the best of luck... he was always a class-act, and never had a problem with accepting criticism or with trying harder to step up his game.  He very well may be able to resurrect his career in Denver... and I'm sure many a Bears fan will be keeping tabs on him.