Eric Peterman Trying to Catch On with Hometown Team

Share All sharing options for: Eric Peterman Trying to Catch On with Hometown Team 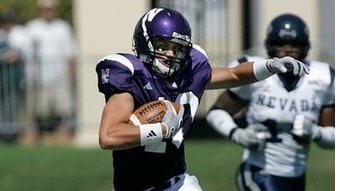 Eric Peterman, the 4th ranked receiver in Northwestern history, did get his name called during the 2009 NFL draft, just not in the manner he thought. His name wasn't one of the 256 players called by a guy in a suit at the podium in New York. Chicago called him prior to the draft being over to offer him a contract to come in. Philadelphia and Tennessee were also interested. For him it was a no-brainer.

"They [the Bears] put a big emphasis on special teams, and I feel like that’s a part of the game I can offer," Peterman said. "I plan on playing two, three, four different special teams, however many they’ll let me play."

That willingness to tackle, something not all receivers like to do, could make the difference when the final roster is decided. "I think it’s just up to them," Peterman said. "They can cut you whenever they want. But right now, I’m a Chicago Bear."

If a undrafted rookie free agent wanted a chance to make a team, this is the place.  The other wide receivers on the Bears roster are:

and Devin Hester who curiously is still listed only as a PR/KR.

The article says Peterman is facing an uphill battle, but really it might only be an uphill tussle.  Hester, Bennett and Iglesias are the only sure locks.  They are desperate for Knox to step up and replace Davis, so that puts us at four.

I still think the Bears bring on board some veteran at some point.  Rideau has been with us for awhile, but apparently has no special teams value othewise I think we would have made the roster by now. If Peterman proves to be an asset on special teams, there is a decent chance he can make the roster.