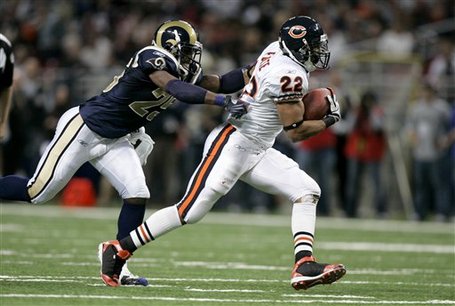 It was no secret that Matt Forte was our offense last year. It is also no secret that we need to limit his playing time to some extent to both increase his in game effectiviness, but also to hopefully extend his career. The Bears took a big step to doing that with the trade for Jay Cutler. The run is still king in Chicago, but Cutler gives the Bears options they didn't have prior.

The next step is to find a capable backup for Forte. The Bears think they have that in Kevin Jones. Last year he was coming off of a knee injury and didn't have a full camp to get ready. This year he will be there and be 100% from the start.

...was fourth in the league with 316 carries last season, averaging 19.8 per game. It was not just the carries--Forte was on the field a lot. He averaged being on the sideline less than 10 plays per game, a pretty remarkable number for a rookie.

Forte was on the field for just shy of 84% of the Bears offensive snaps. The Bears could possibly looking to get that number down to around 75.