Share All sharing options for: NightLink: Goodell on the NFL season's length 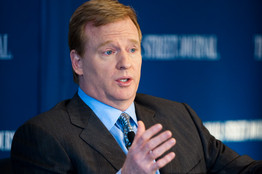 Anyways, Big Rog had some interesting quotes about the NFL season length. It has been brought up and discussed before, but it doesn't look like this topic is going away anytime soon.

On whether a proposal to expand the NFL season might conflict with other sports events in February, like the Daytona 500:

Our season is 27 weeks, from start to finish. That's shorter by almost two months than anybody else. And so, we have a very short and concise season. We're not talking about adding two more weeks. We're talking about taking two preseason weeks and making those into regular season weeks. So the length of our season wouldn't really change. We have talked about the idea where we should move the season later, out of August. When it's [emphasis added] "not football season." And move into a September, October, November, December, January period. And in that case, if you did that, you would go into early February.

On injuries in the preseason:

[Fans] continually tell me, directly and through our research, that preseason games are not of value to them. And on the football side, we don't believe that it adds to the quality of the product during the regular season, as it relates to injury rate. Actually, the injury rate goes down later in the season based on our statistics. And it may be for a variety of factors, which we're studying. Is it the competitiveness of the games? There are a variety of factors that go into that. So you always want to create an environment where the game is as safe as possible for your athletes.

I see this as a double-edge sword: I love the NFL season, so having two extra weeks would be awesome for me as a fan. However, taking away two weeks of preseason could also hurt the quality of play by teams, especially at the beginning of the season. Take our beloved Bears, for example. Lovie runs a creampuff training camp for the players. If you take two preseason games away, that takes away from player development and bringing rookies/newcomers up to speed on the playbook, etc.

But that's just my take. Do you like the current format or would you like to see two preseason games get axed for more regular season games?