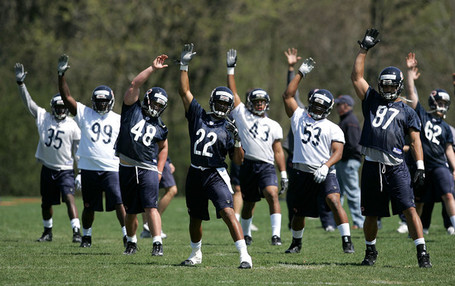 Reading that we were going to be at the 80 man roster limit once we finish getting our rookies signed really made me start looking at who we have on the roster now, and at what positions. Are we on our way to being a well-oiled machine, or do we have severe pruning to be done early?

Here goes my attempt at a very simplified breakdown of positions and possible cuts, and then I'd like to see everyone chime in with what position/players they think are going to get cut/ go to the practice squad.

Quarterbacks: We've of course got Jay Sizzle up front, who isn't going anywhere until someone pries him from Staley the Bear's cold furry hands. I think everyone has liked what they saw from Hanie in his short outings, and Basanez has shown promise in limited outings of his own. While this is definitely not an experience-heavy line up, I feel perfectly comfortable going into the season with these three guys being our signal callers.

Running Backs: Here is where I think we're definately going to see some roster casualties sooner or later, and probably sooner since we're already at the 80 limit before bringing on an extra kicker. Matt Forte and Kevin Jones are locks of course, so that leaves Jason Davis/Jason McKie/ Will Ta'ufo'ou /Adrian Peterson / Garrett Wolfe. I've been trying to work this one out in my head for a while now. I could see Ta'ufo'ou on the practice squad even if he doesn't make the final 53, so unless he just looks really bad in practice I see him at least making the cut to 75. There have also been "words" from the Bears that they don't see an issue carrying 4 RBs on the roster, theoretically making Wolfe/AP both safe this year at least. I think either J.Davis or McKie is odd man out on this one, as we don't need 3 FBs especially with the addition Michael Gaines. If I had to make a gut call, I think Ta'ufo'ou is gone which really grinds my gears, putting J.Davis back on the PS.

Wide Receivers: This is really going to be a pick 'em scenario based on quality production on both offense and ST. Hester/ Bennett/ Igleasis at this time are, and should be, the favorites for the first 3 positions. I've not seen many love notes for the Droppasaurus coming out of the propaganda machine, and shockingly saw a positive vote for Rideau locking down a back up position because of his good ST play, and that being a key factor at backup WR. I see them keeping 6 WR, possibly 7 if Peterman sticks solely for ST. The other two slots are pick your poison between Knox/ Kinder/ Davis. Do they go for pure promise? Can any of them play ST better than the others? Your guess is as good as mine here, but I know I'd rather it be Knox/ Kinder.

Tight Ends: There is going to a big battle here, Olson and Clark are 53 man locks barring major injury. Gaines is supposedly very versatile, while the team has been high on K. Davis for a while. I just don't see a way that Mines makes it out of this alive, maybe he will live on in the PS, maybe not. K. Davis may share the same fate depending on how he looks this offseason when it comes to actually blocking.

Offensive Line: Man does this look better than last year? It's almost unbelievable. This one is fairly easy to break down. I see us dropping one of the rookies who isn't Louis, and then surivial of the fittest after that. Williams/ Shaffer/ Pace/ Omiyale/ Kreutz/ Garza/ Beekman are all going to be suited up, with one, maybe two more, and the majority of the rest hitting the PS.

Defensive Line: Queue the western music, because outside of the FS position you're probably not going to see more battling for backup and starter spots. Adams/ Anderson/ Brown/ Dvoracek/ Harris/ Harrison/ Ogunleye/ Idonije/ Toeania, and that's before the rookies and PS players start fighting for playing time. I'll keep this short since I'll admit my knowledge of DLine is somewhat lacking, but I thought Harrison looked great last year, and if he builds off that is virtually assured either a starting or a rotating role. Mark Anderson may also be looking down the barrel if the rookies start pushing hard. Dvoracek is also probably one season ending injury away from a settlement, if it happens in the next two years.

Linebackers: I'll try to keep this one short as well, I just don't see any way that Hillenmeyer doesn't get cut. His average play appeared to decline due to bad line play, and just some bad play by himself. Tinoisamoa is definitely taking his starting spot, and it seems the Bears like Roach, who is a cheaper option than HH anyway. We know we're looking at PT/ Urlacher/ Briggs, as well as Freeman and one other, with my guess being Williams. This may be another position where we add a slot for a STer.

Defensive Backs: Let me start this out with a plea, unless Josh Bullocks gets hit by a bolt of lighting filled with talent on high, please cut this guy. I swear, he looked so absolutely terrible for the Saints. It's really hard to stand out as terrible on an already terrible defense, but come on. Seriously. Josh Bullocks? At any rate, Vasher/ Tillman/ Moore/ Bowman/ Hamilton/ Manning/ McBride/ Steltz/ Payne/ Earl/ Afalava...out of those I think the only one with anything completely locked down is Tillman. The rest of this is all going to come down to camp battles, although as my one specific call I think we should expect some good things out of Earl. He has a lot to prove, and a good amount of talent.

What are your thoughts?