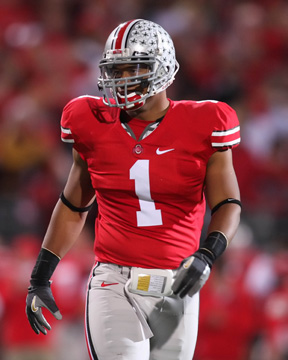 In this week's diary submission on the Bears official site, rookie linebacker Marcus Freeman discusses an array of topics.

We also had Mrs. McCaskey speak to us, and that was very special. It was an honor for all of us. There’s a lot of tradition here with the Bears. Her father, George Halas, helped start the NFL. The interesting thing was that she knows more about football than any of us who were in that room listening to her. She knows the rules and the players, and it was really amazing to see the passion she has for the Bears.

On attending a Cubs game:

It was also awesome going to a Cubs game. You hear about the Cubs no matter where you live in the United States, but to actually go to Wrigley Field and see them play was great. It was my first major league game and to see the fans and the passion they have for the Cubs, it was a great experience. I was a Reds fan growing up, but I never went to a game. After going to the Cubs game, I definitely want to bring my two kids to Wrigley Field.

On working with kids in the community:

I’ve really enjoyed getting out in the community and working with kids. A lot of people say that it’s "giving back." I like to say "pay forward." To see the expressions the kids have on their faces when they meet a player from the Chicago Bears is priceless. It makes their day, and a lot of them say that it’s something they’ll remember for the rest of their lives. To make an impact on just one of those kids is enough for all of us, and it’s something we love to do.

On going to the Great Lakes Naval Base:

We also recently went to the Great Lakes Naval Base. There was one recruit who didn’t have a workout partner, so I joined him. But that was definitely a mistake. The recruits work extremely hard. By the time it was over there were two of us trying to keep up with him. It gives you such respect for them, not only because they’re fighting for our country but how hard they work. People say football is hard, but that workout was tough.

When we were there, their workout started with some agility drills. After that, they had to do 60 pull-ups and then they climbed a huge rope. And then we went to the weight room, and they did a 30-minute circuit of non-stop lifting. That’s really what had me drenched in sweat and had me thinking, "What the heck am I doing here?"