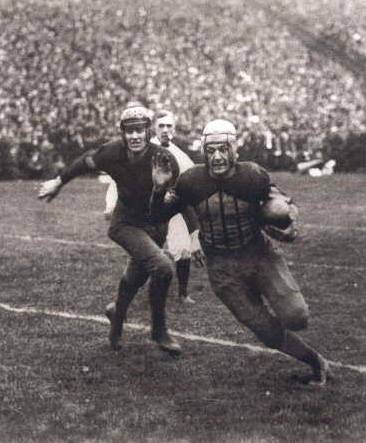 Professional football began in 1892 when the Allegheny Athletic Association paid former Yale guard Pudge Heffelinger to play in a game against the Pittsburgh Athletic Association. Heffelinger returned a fumble 35 yds for a touchdown in the 4-0 walloping. At that time, touchdowns were counted as one point. The first truly professional game was played in 1895 in between the YMCA of Latrobe and the Jeanette Athletic Club. Players made between 10 and 25 dollars for the game; the YMCA won 12-0.

In 1899, the Morgan Athletic Club on the South Side of Chicago was formed, who later became the Chicago Cardinals, who then became the Arizona Cardinals. The Cardinals are the longest running professional team on the NFL.

The Chicago Cardinals circa 1900

In 1902, the first professional league started. The National Football League (oddly enough not the same league) started at the behest of professional baseball teams. The five-team tournament called the World Series of Football was created.  The league only managed to last a whole of two seasons, then promptly folded.

The NFL as we know it now began with a loose confederation of teams in Ohio, of which the only teams to survive were the Akron Pros and the Canton Bulldogs, who employed arguably one of the greatest players ever in Jim Thorpe. The NFL began in 1920 as the American Professional Football Players Association, and Thorpe was elected the league's President, and the fourteen teams began play.

The league began as an agreement to play each other (but that did not bar the teams from playing other teams as well) with a champion crowned out of the best record against the teams. Only four teams manged to not fold under the schedule: , , and . was crowned the champion of the first league with the first perfect season.

The 1921 season saw the acceptance of several more teams, chief among them was the Green Bay Packers who still have a record for the longest time with the same name in the same place.

Most importantly, in 1921 A.E. Staley sold his Decatur Team to George Stanley Halas who was a Player/Coach, who moved the team to and in 1922 renamed the team the Bears. 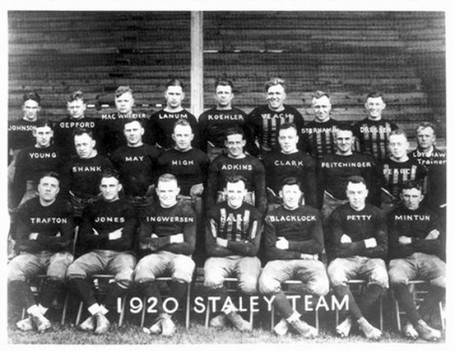 In 1932 the Chicago Bears and the Portsmouth Spartans were tied for the best record after only losing to each other, and because a consensus could not be made, the league voted that the two teams would have a playoff to determine the League Champion.

The unusually cold weather forced the game to be played at the stadium. , of course, won 9-0. The playoff was so popular that the league chose to reorganize into two divisions and the best record out of each would play to determine the champion.

1933 also was the year of some of the more radical changes to the rules, with all play beginning between the hashmarks, the goalposts were moved to the front of the endzone, and forward passes could begin anywhere behind the line of scrimmage, instead of the usual 5 yds back.

The war years ground professional football to a halt as more than 9/10ths of the players enlisted in the military.