NightLink: Tom Thayer Speaks Out About the Chicago Bears

Share All sharing options for: NightLink: Tom Thayer Speaks Out About the Chicago Bears 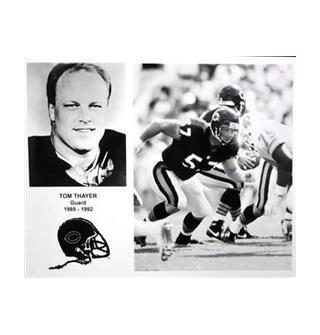 Which individuals have impressed you most during OTA practices?

Earl Bennett is the first guy you mentioned. How has he impressed you?

How has Payne stood out?

A lot of it has to do with his athleticism in individual drills. You watch him doing basic drills compared to the guys in front and back of him, and he looks very athletic. He has all the traits they look for in evaluating defensive backs. He’s very smooth. Obviously we know he’s confident in his contact. He just has to make certain that he’s sure about his assignments, so that every adjustment that needs to be made can be made instinctively and not have to be thought about, and I think that’s where Kevin Payne is really making the most strides.

How confident are you that the Bears defense will revert to the form it displayed in 2005-06?

Thayer goes on to say that his biggest concern is the other safety position.  I personally really like Craig Steltz, but we haven't heard much about him this offseason.

If I had to assign grades right now, I'd say:

I am hopeful that, with or without an upgrade to our WR corp, we will win the North, and contend with the big boys in the NFC.