A Realistic Viewpoint on the Brandon Marshall Situation

Share All sharing options for: A Realistic Viewpoint on the Brandon Marshall Situation 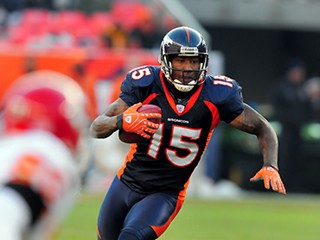 The Brandon Marshall topic and moreover the Marshall vs. Plaxico Burress issue has been pretty hot here since Marshall decided to stir up another rocky high dust storm.  While there are some realistic reasons to consider Burress, especially if he does avoid jail time and additional punishment from the league.  The Marshall deal is different.  It is just easy to go after it considering how things went down with Jay Cutler.

I wanted to point you to an article at Mile High Report (run by John, one of SBN's finest).  It is a informative bit, give it a read.

Yes, Brandon Marshall is choosing to stay away, "hold out" if you will, and yes, I think it is a horrible mistake.  It's easy to blame Josh McDaniels or the Broncos, especially with everything that has transpired this offseason.  This situation, however, has very little to do with McDaniels and the Broncos, and everything to do with a player looking to cash in.

I can't say I really disagree with Marshall's action, at least the idea of wanting a new deal.  There is a lot of uncertainty in terms of labor negotiations, and with Marshall on and off the field.  While all the players involved in the CBA seem to be saying the right things, talking of how positive they are that a deal will get done, no one in the NFL can rest easy until it happens.  Guys like Marshall are in an unenviable position.  Instead of looking forward to UNRESTRICTED Free Agency and the riches it could hold, if the league goes uncapped guys like Marshall would have to play 2 extra years under RESTRICTED status before gaining their freedom.  In a violent sport, where your career could end on any given play, 32 games + preseason + practices = huge risk.