What do Orlando Pace, Jon and Kate, and Olivia Munn Have in Common?

Share All sharing options for: What do Orlando Pace, Jon and Kate, and Olivia Munn Have in Common?

Answer:  They are all cover models this month.  Of course, this one isn't as cool as Munn's, but it sure beats seeing that crazy lady on any more  magazines.

Orlando Pace is on the cover of The Sporting News. 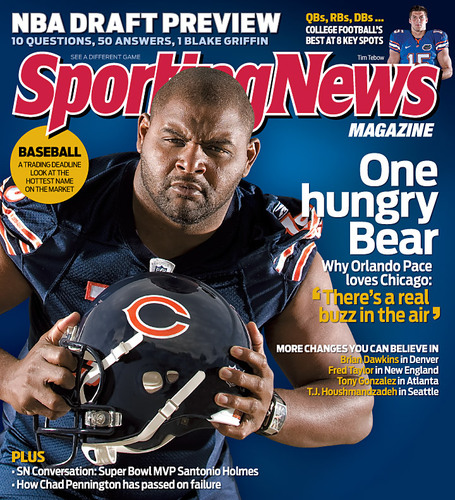 "I already had a bit of a feel for the Bears because we played them two out of the last three years. I knew a couple guys on the team and some of the coaches, including Lovie Smith, who was our defensive coordinator in St. Louis for three seasons. There's a real buzz in the air in Chicago about the Bears. It's something you can really sense. They held this Bears Expo at Soldier Field and there were a lot of fans who showed up. I probably hadn't seen such excitement in the offseason since we went to the Super Bowl in St. Louis."