NightLink: Reading Between the Lines?

Share All sharing options for: NightLink: Reading Between the Lines? 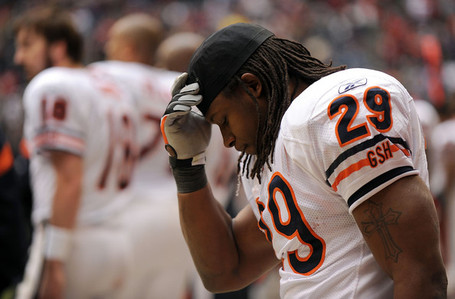 On the Chicago Bears official site, there is an article about how Jay Cutler is handling the criticisms that have been tossed his way since his arrival in Chicago (see: Tony Dungy, Mike Ditka).  Of course, Jay says all of the right things and sounds like he is ready to disprove his critics and play football.

But what caught my attention was further down in the article.  Now, I know it is never wise to automatically take things like this at face value, but I also know that after moves get made, you can sometimes comb back through old items, and maybe find hints of what was to come.

In this case, it is a quote from Lovie Smith on the Bears running backs.  We all know that our 1-2 punch of Matt Forte/ Kevin Jones will exist, and we have heard from Ron Turner that he expects to work Garrett Wolfe into the mix.  As far as Adrian Peterson goes, he has been a staple on Special Teams, and considered by most of us to have a solid grasp on a roster spot.  But here is Lovie's comment:

"We’re a running football team," Smith said. "We’re going to pound the ball quite a bit. That’s why it’s important for Kevin. It’s also important for [third-stringer] Garrett Wolfe. Garrett has had a good offseason too. … You need at least two and then maybe even three [running backs]."

He mentions Jones and Wolfe outright, but does not mention Peterson.  We also have not heard anything from OTAs about Peterson.  Could Lovie's comment be a sign that we will only carry three RBs on the roster this year?  Is there a need to keep Peterson on the roster for Special Teams/ RB depth?

And what about our FB?  We know that Michael Gaines has played both TE and FB... should we expect the Bears to cut ties with Jason McKie, and play the 275lb Gaines at FB?