Is This the Bears' Best Off Season Ever?

Share All sharing options for: Is This the Bears' Best Off Season Ever? 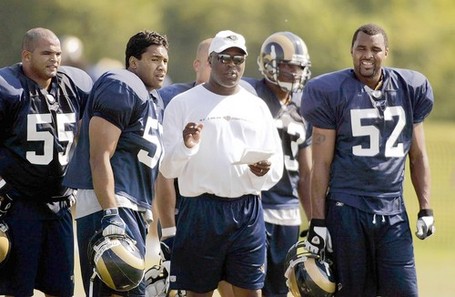 In this article, the author says "I know it would be hard to argue with anybody objectively labeling this the best off-season in Bears history...". Let's try, if we can.

The Bears have addressed all major needs to various degrees. The biggest move of course is the trade for Jay Cutler. Bringing the Bears their first franchise quarterback in at least 25 years depending on your opinion of Jimmy Mac.

They have also used a fair amount of FA money to bolster the offensive line. The biggest signing is Orlando Pace. Angelo has also signed Frank Omiyale and Kevin Shaffer as well. Omiyale looks to be in the starting line up, while Shaffer is battling 2nd year man Chris Williams.

They resigned Kevin Jones to backup Matt Forte. Jones now 2 years removed from his surgery should be ready to go and with the Bears looking to take some of the load off of Forte, will get more carries. They also signed Michael Gaines who is rumored and would be more useful if moved to fullback to help the run game.

The Bears did not make any significant moves during the off season to improve the receiving game. He did attempt to some level to aquire Anquan Boldin from the Cardinals, but his biggest move might have been his non moves, by not going after guys like TO, Ochocinco or Plaxico Burress. He did draft Juaquin Iglesias, a 2nd round prospect, in the 4th round of the draft. In the same draft the Bears brought in Derek Kinder and Johnny Knox.

On the defenisve their first pick in the draft went to Jarron Gilbert. They just recently brought in Pisa Tinoisamoa to likely start at strong side linebacker.

There is still some question in the secondary. Josh Bullocks and Glen Earl were brought in, but are not expected to be starters, but they do add depth. Bullocks is looking to back up Kevin Payne. Craig Steltz is battling CB transplant Corey Graham for the other safety spot.

The Bears made some real solid moves on the coaching staff. First, Coach Lovie Smith is taking over defensive play calling for Babich, who is not ready to handle that duty. Their self called biggest move in the offseason up until the Cutler deal was brining in Rod Marinelli to get our defensive line working. They also brought in Jon Hoke.

I know that you can't really judge all of this for a few years. We still don't know how Cutler will do or any of the rookies, but just based on what they attempted to do, is this the best Bears off season ever? Vote and leave your comments.