Share All sharing options for: NightLink: Can Brandon Rideau Contribute?

The Chicago Bears picked up wide receiver Brandon Rideau after he was cut in the 2006 preseason by the Cleveland Browns.  He has since spent his time on the practice squad.  A lot of people have been asking about Rideau, wondering why the Bears have been keeping him around for so long without actually doing anything with him.  Larry Meyer addressed Rideau in the May 26 edition of Chalk Talk. 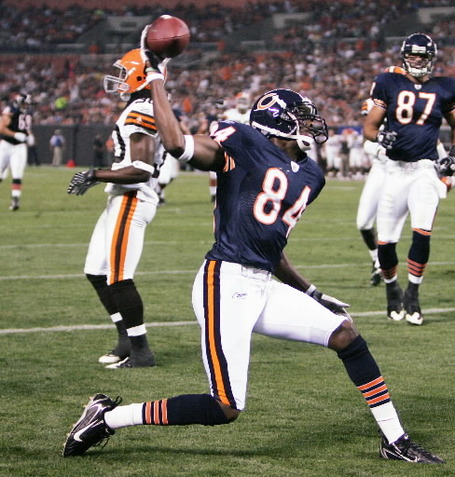 Brandon Rideau is having a very good offseason. He’s made some nice catches in the workouts I’ve watched, including a nifty grab along the sideline in an OTA practice last week. Given his knowledge of the system coupled with the lack of experience at the receiver position, Rideau should have a golden opportunity to earn a spot on the Bears' 53-man roster and possibly contribute on offense. As a receiver, Rideau has excellent hands but lacks top-end speed. One big thing in Rideau's favor is that he's a solid four-phase performer on special teams, something that's a requirement for the fourth and fifth receivers.

Brandon Rideau is listed at 6'3", 198lbs, and was undrafted in 2005 out of Kansas.  He has good size, good hands, and 2009 seems like the perfect opportunity for him to start contributing.  Last preseason, Rideau ended up with 5 catches for 127 yards and 3 TDs.  The Bears are not strong at WR, and having Jay Cutler at the helm might just bring out the best in Rideau.  He is also the tallest WR on the Bears roster.

What do you think are the chances of Rideau making the 53-man roster?