NightLink: It May Have Happened, or Maybe Not. But Probably Will Though...

Share All sharing options for: NightLink: It May Have Happened, or Maybe Not. But Probably Will Though... 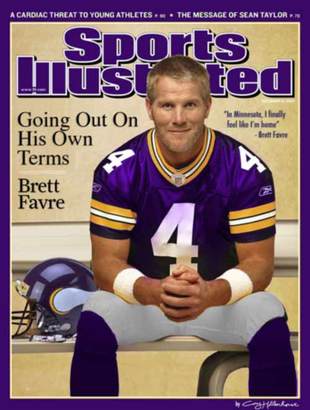 Several weeks ago, I made a pledge to this website that I would not post anything else on Brett Favre until he actually signed a contract.  And since then, on almost a daily basis, there has been Favre-related stories littering the InterWebs, and I have stayed away from them.  Alas, I write a quick Brett Favre story.  But am I breaking my promise?  Has he signed a contract?  Almost definitely maybe, and quite possibly questionably yes.

I have not done a very good job of keeping up with a timeline of the Annual Retirement Waffling Story, so I will not try and catch you up on where this has been over the last few weeks.  But here is what I do know, or what may be the truth.  Possibly.

We know (or think that we know) that Brett Favre will play for the Minnesota Vikings if his surgically-repaired arm will let him.  Peter King talked to the High School coach in Mississippi, and it sounds like the arm is looking good.

Brett Favre is throwing the ball with the old zip, evidently. Bob Papa and I had the coach of the high school where Favre is throwing, Neville Barr, on our Sirius NFL Radio show the other day. Favre's been throwing at Oak Grove (Miss.) High School, and Barr said: "He looks good. He said it was still a little uncomfortable, but I thought he threw the ball well. He had a lot of velocity and zip on it.'' It's a matter of time, as we all know. Only a setback in his throwing will stop him from being at Vikings camp.

Mike Florio thinks that Brett Favre will sign a contract on July 3rd, because that would get significantly less media attention, being the day before the holiday.  (Yeah, sure.)

As we mentioned last night, if the Vikings are holding in their back pocket a contract with Brett Favre’s Herbie Hancock on it, they likely are waiting to announce the move at a time that would entail a reduced media reaction.

The best day between now and the start of training camp is, in our assessment, Friday, July 3.

That’s when plenty of reporters will be on vacation (or, as the case may be, unpaid furloughs).  And if the news breaks late in the afternoon of the 3rd, it’s less likely that ESPN will send a fleet of satellite trucks to Minnesota and/or Mississippi as the Fourth of July weekend commences.

Then, the press conference would be held on Monday, July 6, likely with a reduced contingency of Minnesota, Green Bay, New York, and national media throwing elbows in the room.

And then, the interesting nugget of undoubtedly credible journalism, straight from Pro Football Talk:  Favre may already be under a secret contract.

The rumor that the source would neither confirm nor deny is that the Vikings already have signed Brett Favre, and that the team and Favre are waiting to release the news.

If accurate, this means that the Vikings have a signed contract that they have yet to submit to the league office.  Setting aside for now the question of whether league rules permit such tactics, it puts into perspective recent developments such as Favre’s use of "we" when discussing the matter with Artie Lange’s biatch, the visit by a Vikings trainer to Favre to check on his arm, and reports that coach Brad Childress wanted to see Favre participate in some of the offseason workouts.

These details all make much more sense if Favre already is a member of the team.

The other bit of information, which we also posed to the source who declined to confirm or deny the rumor, is that the Vikings already have green-lighted the production by Reebok of purple jerseys bearing the number 4 — and the five-letter name that isn’t pronounced like it’s spelled.

Of course, Favre's agent Bus Cook has said that it isn't true, but I could also say that half of what comes out of Cook's mouth isn't true either.

Questions to ponder for this NightLink:

1- Do you care either way if Favre signs (or has already signed) with the Vikes?  Will he make them more dangerous?

2- Have you been following the timeline/ daily rumors?  Do you think that any of these people know what they are talking about?

3- Would the NFC North have the strongest set of QBs in the NFL in Cutler/ Rogers/ Favre/ Stafford?