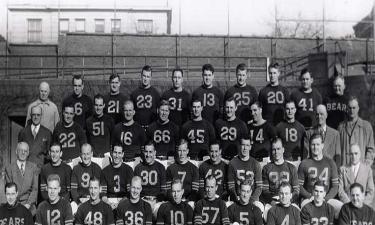 1942 saw players shipped off for the war. George Halas left for the navy in mid-season leaving Luke Johnson and Hunk Anderson as co-coaches. The Bears went 11-0 before falling to the Redskins 14-6.

In 1943 the use of helmets was made mandatory and the 10 game schedule standardized. The Bears got revenge on the Redskins in the championship 41-21.

1946 was the integration year for the NFL, after the LA Rams signed Kenny Washington and Woody Strode. Side Note: Baseball integrated in 1947. Just thought you might like to know.

[Note by WCG, 06/23/09 10:27 AM EDT ]Before this post was hidden, so we could fix the formatting it hit Google.  As it turns out Woody Strode's daughter, Kalai found the article and emailed me.  She was interested in reading info on her father and checking the accuracy of the post.  I sent her the post and she forwarded some further info I thought you all might be interested in.  Thanks to Kalai for the email and the info.

Jackie Robinson played with Kenny and Woody on the 1939 UCLA football team and held USC to a 0-0 tie.  Kenny played in the All Stars game at Soldiers Field in 1940 and was asked to stay an additional two weeks by George Halas who tried to get Kenny into the NFL, but was over-ruled (probably by George Preston Marshall). Kenny and Woody played on the Hollywood Bears, a semi-pro team in Los Angeles) until Pearl Harbor, after which their coach (and Bears owner) Paul Schissler joined the Air Force and formed a service team called the March Field Flyers at March Field, Riverside California. Kenny and Woody resumed with the Hollywood Bears as soon as the war ended until Dan Reeves wanted to move the Rams from Cleveland to Los Angeles. He was opposed by Halley Harding, the African American sportswriter for the Los Angeles Tribune, who made a stirring speech to Leonard Roach and the Coliseum Committee against segregation in the NFL, which lead to Dan Reeves having to accept Kenny in order to have the coliseum venue. Kenny wouldn't sign unless Woody came with him, but because Woody was married to a full-blood Hawaiian (Princess Luana Kalaeloa), Dan Reeves did not want Woody, but had to take him anyway. Woody was placed on defense, in order to injure him, and remove him from the team, but he persevered through the season. They released Woody after the first exhibition game of the next season. Chili Walsh (the manager) and Adam Walsh (the coach) both resigned. Woody went on to play Canadian football for the Calgary Stampeders winning their first Grey Cup championship.

Cleveland, Baltimore, and San Francisco joined the League in 1950, which was the same year that the LA Rams televised all Home and Road games, the first to do so.

The Eligible receiver rule was established in 1951.

The NFL awarded Dallas a franchise called the Texans, who proceeded to go 1-11 and promptly folded, the last team to do so. 1952 also brought about the death of the Single Wing, who was held alive only by Pittsburgh.

In 1957 the co- owner and founder of the Forty Niners, Anthony Morabito, dies of a heart attack during a Niner- Bears game at Kezar Stadium.

In 1958 George Halas reinstated himself as coach after doing only the General Manager duties for almost 16 years.

The AFL began with 8 teams:

Also in 1959, the NFL was shocked with the ousting of Curly Lambeau and the hiring of Vince Lombardi. NFL commissioner dies of a heart attack during the last two minutes of a game between the Eagles and the Steelers.

The only thing of note in 1961 was the drafting of Mike Ditka in the first round.

1963 was the sixth and final championship of Halas' coaching career; the Bears defeated the Giants 14-10.

Butkus and Sayers with Papa Bear

1965 was arguably the best drafting year for the Bears, selecting Dick Butkus and Gale Sayers with the third and fourth overall picks. Sayers wins ROY and scores 6 TDs in a game against the 49ers.

1966 was the Greatest year for professional football with the merger of the AFL and the NFL. 24 teams formed the league with expansion planned for 1968 and 1970. Although the conferences kept separate schedules, they agreed to meet and play for the World Championship. Pete Rozelle was named the first Commissioner. The Packers defeated the Chiefs 35-10 to win the first Super Bowl. 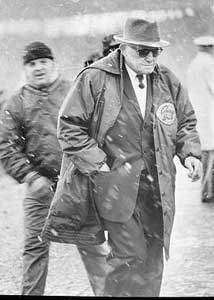 A sad day for football this was

1968 marked the end of the greatest ever to coach football: George Halas retired from coaching for the fourth and final time with 318 wins and a .682 winning percentage.

Also in 1968 Lombardi retired as Packers head coach with only 96 wins but a .738 winning percentage.