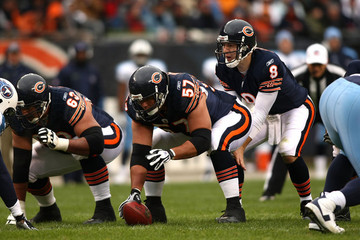 Yesterday, we saw that Brian Urlacher was the only Bears player to get featured on ESPN's All-Decade Defense.  Today, they have released their All-Decade Offense.  Before I clicked their article, I tried to see how many Chicago players could make the list, and I came up with the only name that ESPN did.

Center, Olin Kreutz: This was a three-way toss-up between Kreutz, Kevin Mawae and Matt Birk. All three players have been to six Pro Bowls.

The tiebreakers: Kreutz appeared in a Super Bowl with the Chicago Bears and more league personnel named him than Mawae or Birk.

"You look at a guy like Kreutz and you really appreciate his consistency," San Diego Chargers general manager A.J. Smith said. "He is an all-decade-type player."

The full roster is as follows:

What do you think of their list?  Any other Bears player that you can think of?  Did they get the positions right?