Share All sharing options for: Tampa 2, Cover 2; What do the Bears do? 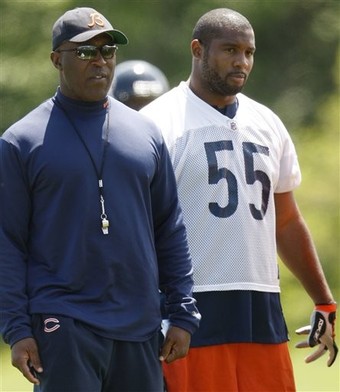 There's been other blogs that looked at what the Bears do defensively, other breakdowns done, but coming from a coaching/teaching perspective, it's best to learn through repetition.  I may touch on something that makes sense in a way that was misunderstood before, or I may hit on something that was overlooked in past posts.  So what exactly are the Bears trying to do on Defense?  Find out after the Jump...

The Bears play their version of the Cover 2 that Lovie Smith learned and help implement while working along side Tony Dungy and Monte Kiffin in Tampa Bay (the Tampa 2), and that Tony Dungy learned while playing in Pittsburgh under Chuck Noll and Bud Carson.  At it's simplest the Cover 2 means the 2 safeties play a deep zone, each taking half the field, and what ever combination of  corners and linebackers are on the field will play 5 underneath zones.  The most important factor in playing any variation of the Cover 2 defense successfully is speed.

The Cover 2 look is often criticized as being a bend but don't break defense.  Offenses are able to pick up small chunks in the passing game and slowly move downfield.  By sitting in the zone there are natural pockets a good QB can exploit.  If a receiver finds a hole and makes a catch, in theory, the speed of the defense will converge and punish any potential ball carrier.   Through the repeated beatings receivers eventually get alligator arms or start dropping the ball in fear.

Tampa 2 coaches always stress turnovers, and because they want a swarming fast defense, you'll always see guys trying to strip the ball.  In theory, 1st guy wraps the ball carrier, 2nd guy in attempts the strip.  Some players can do both on the tackle.  Charles Tillman is one of the best at wrapping up and stripping in the same motion.  You'll see the pass rushers going for the strip while trying to sack the QB.

Without a doubt, the biggest variation between the Cover 2 and the Tampa 2 is the middle linebacker will sprint down the middle of the field thus actually turning the defense into a Cover 3.  The MLB is responsible for his usual short zone as he runs through it, and his deep middle zone as he gets to it.  By the MLB doing this it takes away some of the coverage weaknesses of the Cover 2.  If the football gods made a Tampa 2 MLB, they'd make a tall (6'4"), lean but big (260), with sideline to sideline speed, and that has good coverage skills, ideally a player that has played safety, basically Brian Urlacher.  His height makes it harder to dump passes over his head between the two safeties, and his speed makes it hard to attack the seams like many teams do against the Cover 2.  The Bears defensive scheme sometimes takes Urlacher away from the action, and that allows blockers to get into him on occasion.

If there's one thing I hear that just ticks me off is complaints that the Bears D-Line needs to keep the blockers off Urlacher.  Nope.  Wrong.  That is such a pet peeve of mine.  That isn't the basis of what the Bears do defensively.  The Bears ask their defenders to attack 1 gap and 1 gap only, not to take up space.  Back when the Bears had behemoth DT's Keith Traylor and Ted Washington, their scheme asked those 2 tackles to tie up the offensive center and guards as they had 2 gap responsibility.  A quick word on gaps; between the center and guard is the A gap, between the guard and tackle is the B gap, between the tackle and the tight end is the C gap, outside the tight end is the D gap, and some coaches call the E gap just past the D but before the split ends.  So Traylor and Washington would tie up the A and B gaps to either side of the center, allowing the MLB to run free.  This was the successful formula the Ravens used in their Super Bowl win, with Ray Lewis causing havoc.  In this current Bears defense Chicago has their defensive linemen attack their lone gap and to disrupt anything that runs by.  They want them to penetrate through their gap, but not to over run the play.  When you see a running back squirting under a D-Lineman for a gain that's a sure sign he over pursued his gap.

We'll hear commentators and read columnists referring to the 3 Technique defensive tackle.  Sometimes I wonder if they even know what that is.  Mike Mayock of the NFL Network generally does a god job of getting technical when explaining football jargon, but many others just throw stuff out there to sound intelligent.  Tommie Harris (the 3 Technique) lines up on the guards outside shoulder and is responsible for shooting that B gap.  The technique numbers basically pertain to where the lineman lines up.  The nose tackle is basically a 0 Technique (head up on the center, and usually used in the 3-4 defense), a 1 Technique nose tackle (lined up on the centers outside shoulder), is the type of nose tackle the Bears use, but he still only has 1 gap, that A gap, responsibility.  The Technique numbers simply go shoulder to shoulder down the line.  The 2 Technique lines up on the guards inside shoulder, and so on.  The 3 Technique tackle is essentially the engine that makes the car go, and the defensive line is that car.  Nothing the Bears like to do defensively will work unless the car is running smoothly.

Penetration from front 4 is essential to any variation of the Cover 2.  If you are forced to blitz, like the Bears were last year, you just can't run the defense.  You need those 4 down lineman to penetrate and disrupt running plays or to pressure the QB on passing plays, so your remaining 7 defenders can play their zones accordingly.  This is why Lovie calls the signing of Defensive Line Coach Rod Marinelli such an important piece of the puzzle.  If Marinelli can max out the potential of the D-Line the defense will get back to more Cover 2, and subsequently less blitzing.  Last years numerous blitzes and Mug look (lining the LB's up close to the line of scrimmage near the A gaps) took away from what Lovie Smith had built the defense up to be.

Another staple of the Tampa 2 is the weak side linebacker being put in situations to make plays.  The Buccaneers had Derrick Brooks at that spot, and the Bears have Lance Briggs.  You need a fast, instinctive player, with great range, and Lance Briggs is a perfect fit, perfect to the tune of 4 straight Pro Bowls.  Briggs is usually the unblocked defender, as the D-Line all are shooting their gaps, the strong side linebacker is lining up with the tight end, and the MLB is usually taking on the 1st free blocker.  Briggs is set up to succeed in the system, but he still has to execute.

Good secondary play is critical for the Cover 2.  The corners have to be able to lock onto the wide outs while still looking for a secondary receiver to come into their zone.  Knowing when to pass off the receiver to the deeper safety and then having the safety know when he's coming is where breakdowns can occur, and unfortunately the least experienced area of the Bears defense is safety.  Strong safety Kevin Payne will have to be the seasoned veteran in '09, helping along either Craig Steltz or Corey Graham.  If they can play fundamentally sound the defense should be back to a top five unit.  Then again if that defensive line is causing chaos up front it may not matter.