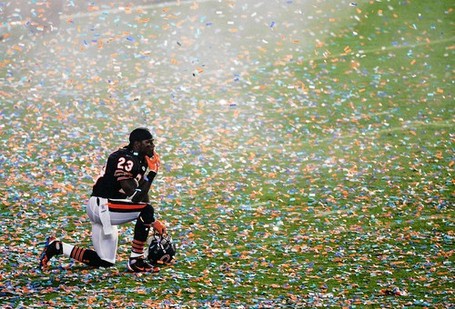 We brought you ESPN's All-Decade Offense and Defense, seeing Olin Kreutz and Brian Urlacher featured on the lists.  We have another Bears player featured today, this time on the All-Decade Special Teams list.  And no, it's not Patrick Mannelly.

Returner, Devin Hester: Hester's impact has been relatively brief but nonetheless historic. He set an NFL-record for touchdown returns during a season in both 2006 and 2007, and his total of 11 over that span ranks him fourth all-time in the NFL.

You could make an argument for the consistency of Dante Hall, who returned 12 kicks for scores while playing for Kansas City and St. Louis from 2000-07. When the Bears made Hester a full-time receiver last year, his production as a returner evaporated.

But most of the observers we spoke with suggested Hester made a superior impact on games during the two years he was a full-time returner. From squib kicks to intentionally punting out of bounds, opponents went to great lengths to keep the ball out of his hands.

At the end of the 2007 season, Hester was averaging a touchdown for every 13.8 returns. He was also the second player in NFL history to surpass 500 yards in both kickoff and punt returns in consecutive seasons.

The Bears have removed Hester from kickoff returns but he is expected to remain their primary punt returner in 2009. In either event, from 2006-07, Hester altered games like no other returner in league history.

Devin Hester as a kick returner is a bittersweet memory.  At one point, he was the most electrifying player in the entire NFL, and threat to score everytime he was on the field.  Opposing coaches knew that, and for the most part would try anything to not have to kick it to Hester.  It was even getting to the point where analysts were saying that kicking out of bounds and taking the penalty might be the best option in avoiding the explosiveness of Devin Hester.

But as the Bears quickly learned, a player with that much talent needs the ball in his hands more than 3 or 4 times a game.  When Devin Hester looked at his statsheet, he didn't see the TDs, return yards, or average yards per attempt.  He saw dollar signs.

Fast forward to now, Devin Hester is no longer returning kicks, which is what adds the "bitter" to the sweet..  He got a big fat contract, and will get opportunities to score touchdowns from a wide receiver position instead.  Danieal Manning did a fine job last year returning kickoffs, and will undoubtedly do the same again this year.

But how will Hester develop as a wide receiver?  Will Jay Cutler be able to maximize Hester's potential to punish opposing teams?  Only time will tell, but I certainly hope that this is the case.  I'd really hate to see Hester used as trade bait in the future.

Rounding out the remainder of the All-Decade Special Teams unit: