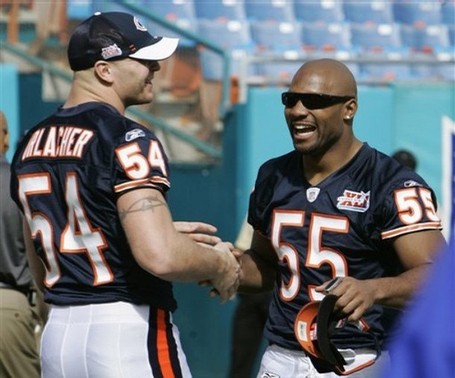 Of course, it is too early to effectively try and predict who will fill the starting positions in the upcoming season, but if there is anyone who has insight to such matters, it is Larry Mayer.  Training camp will will answer a lot of questions, and I'm sure that even Larry's opinion will change come August, but here is a look at what he thinks right now:

Matt Forte at running back,

I’m sure some people will wonder why I haven’t included Greg Olsen as a starter, but Clark and Olsen are basically co-starters at the tight end position. Both are on the field quite a bit, and they’re often out there together in two tight-end formations.

The one prediction that’s a toss-up to me is at free safety, where Corey Graham very easily could start ahead of Steltz.

If this is indeed how the starting lineup will look come regular season, how would you feel about it?  What would be the weakest links?