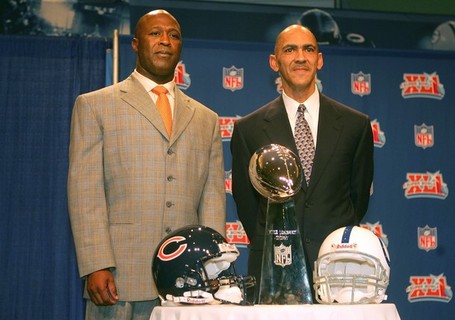 As you have probably heard by now, former Indianapolis Colts coach Tony Dungy, along with former Patriot Rodney Harrison, has taken a gig with NBC's NFL Studio Show.

During a teleconference today to announce the move, Coach Dungy was asked about Jay Cutler (I have no idea why).  Dungy was not exactly singing the praises of the Bears or of Cutler.

"I really think Chicago gave up a lot to get a quarterback who they believe is going to be the final piece of the puzzle," said Dungy. "But I'm not sure he's won enough to merit that yet. It may turn out to be a great move, but the jury's out. To me, it was a risky move. But I think one that was done with the idea of beating one team."

Beating one team?  No way I believe that.  He also has an opinion of Jay Cutler.

"We'll see about the maturity level, that's what I would question," said Dungy. "And some of the things that happened leading to him leaving Denver. That would concern me as a coach. That's my question. I think he can make all the throws. But quarterbacking is much more than making throws."

I have always liked Coach Dungy, and I completely respect his motivation for leaving the game so early.  This, however, seems a bit out of character for him.  I don't automatically expect him to put on a diplomatic face and tell people what they want to hear all the time, but to basically call the Bears out for making the trade, then publicly criticizing Cutler for how things went down in Denver?

I wonder how his buddy Lovie Smith is going to respond...