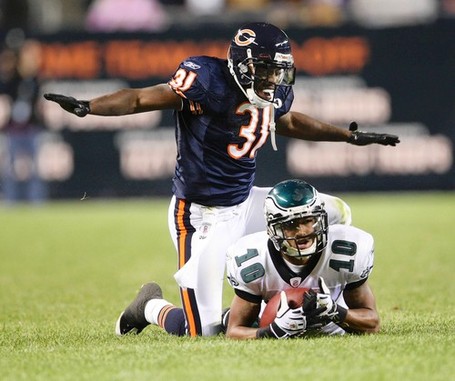 Nate Vasher is a good fit in the Cover 2.  He's not the fastest or the the most physical, but he has real good ball skills and he has good route recognition.  I'm not buying the hype over him being "The Interceptor" (I think Charles Tillman is the best corner on the roster), but I can't deny his impact when he's in the lineup.

The CB depth took a hit with Corey Graham being moved to safety.  I though Graham was a nice fit last year at corner, and I do think he will end up eventually starting at FS.  If Vasher falters, the Bears will have to turn to Trumaine McBride, untested Zackary Bowman, or rookie D.J. Moore.

I thought McBride played OK in his limited starts the last 2 years (9 in '06 & 1 in '07), I was high on Bowman out of Nebraska last year, and I think Moore will develop into a player the Bears can count on, but the Bears don't need any more unknowns in their secondary in 2009.  I'm sure Graham is at safety for good now, especially after seeing how the position switching stunted the development of Danieal Manning (see: DMS), so the days of Graham at corner are over.

The Bears need Nate Vasher to stay healthy (he hasn't played all 16 games since 2005) and play a solid corner.  It was only a few years ago the Bears were thought to have one of the better corner tandems in the league.