Bears Receivers Off To Good Start

Share All sharing options for: Bears Receivers Off To Good Start 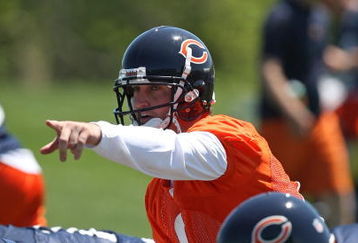 Now that the Bears have addressed just about every off season concern they had, most people are looking at the one spot that is left as the reason they are going to fail, wide receiver.  Yesterday, Peter King was on the radio with Randy Cross and he had the Bears at 3 in the NFC North, his reasoning was the recievers.  He had the Bears at 9-7.  Far be it for me to remind him that Kyle Orton and the raggedy line we had last year achieved that mark.  Now a franchise Pro Bowl QB and a rebuilt line will be under that mark?

Of all people, Chris Mortenson is here to shine a little sunlight on our receivers.  Yes, it is just OTA, so no need to leave 1,000 comments about it, I get that.  But the Bears receivers have looked very good and with Cutler getting them the ball quickly and accurately the defense has been left playing catch up.

Citing a trusted source, ESPN's Chris Mortensen says it's "amazing" how much better the Bears' receivers have looked with Jay Cutler at QB so far.

It's only spring and Devin Hester, Greg Olsen, and Earl Bennett haven't taken a single hit, but the news is encouraging. Chicago's receiver corps will have a far easier time getting the ball from Cutler and his career 62.5% completion rate than they did from Kyle Orton (55.3%) or Rex Grossman (54.2%).

The QB and receivers go hand in hand, improve one and the others will improve to some extent.  Again, nobody is looking to take the receivers heads off, but the defense has pride and isn't giving it to them.

It will be interesting to see what the word is come training camp and pre season.