Johnny Knox is Showing Off At OTAs

Share All sharing options for: Johnny Knox is Showing Off At OTAs 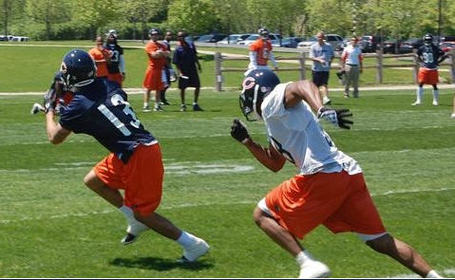 Buried among all the bits of info coming out of OTAs, like a random "Cutler connects with Hester in stride" story and the "Bears continual search to throw everybody at the safety position except for the grounds crew", is this small story about Johnny Knox.

Knox thus far has been the most impressive rookie the Bears have.

Knox, who is arguably the fastest player on the field, has shown sticky fingers in almost every practice, catching anything within his grasp and rarely having a bobble, let alone a drop. He's still got a long way to go before he gets on the field once the regular season begins, but Knox will challenge for playing time in three and four-wide receiver sets if he continues to show the same sure hands and run-after-the-catch ability.

"It's coming along each day," Knox said. "I have to take my time and just have to get the feel of the quarterback, but I am feeling really comfortable each day."

The Bears wide receiving corp is still thier biggest question mark.  Hester should continue to improve and Cutler will only help there, but after that the Bears have a bunch of rookies and a second year guy.  Anything a rookie can give us is a huge deal.