NightLink: Where Does Lovie Rank?

Share All sharing options for: NightLink: Where Does Lovie Rank? 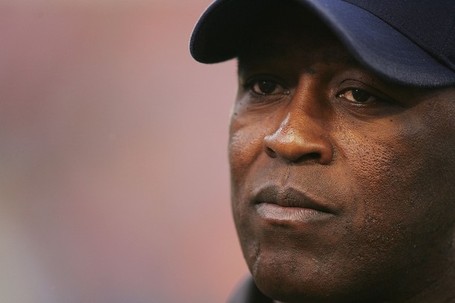 Over the last couple of weeks, we have looked at a few different sets of rankings, some for players, and some for coaches.  Last week, we saw where Ron Turner and Bob Babich ranked (or didn't rank) among coordinators in the NFL.  Now, down to the nitty-gritty.  Before you click the jump, where do you think Lovie Smith would rank among all NFL Head Coaches?

Try to be objective, and give it some thought for a moment.  And to help out, I'll post this list of all HCs in the NFL right now.  Give it a look, and see what you think.

Sporting News' rankings after the jump.

20. Lovie Smith, Bears. A Tony Dungy disciple, Smith is the picture of stoicism. He is one of the first generation Tampa-2 guys on defense, and his group will be much better this season now that he is reunited with line coach Rod Marinelli. Smith's new quarterback, Jay Cutler, will make him and his team better.

That means, only 12 HCs are worse than Smith.  I could really spend some time ripping this to shreds, but I found that David Haugh is already all over it, and said exactly what I was thinking.