Another Former Coach Weighs in On Cutler: Ditka Speaks

Share All sharing options for: Another Former Coach Weighs in On Cutler: Ditka Speaks 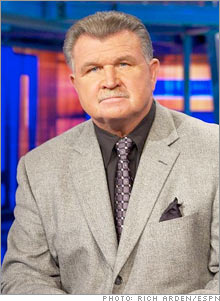 Last week, we heard the comments made by former Indianapolis Colts coach Tony Dungy about Jay Cutler... some of us cared, and some of us didn't.  This week, we have another former coach doing the talking- Ditka.

"People ask me one question: Is he a good quarterback?" he said in a telephone interview. "Well, he's got a great arm. He had great receivers up in Denver, they had an offense that threw the football a lot, so it highlighted his strengths. If he's in an offense that doesn't highlight his strengths, what's his strength going to be? It's got to be leadership, like Tony said. And he's got to prove that."

That is a great point by da Coach.  I remember before the Bears even acquired Cutler, I was personally wondering if the potential "pros" would outweigh the potential "cons".  I have no problem admitting that, before Cutler was a Bear, he was one of my least favorite NFL QBs... he constantly reminded me of Phillip Rivers.  Talent-wise, both of those guys have the goods.  But it always seemed like they would both pitch a fit anytime something did not go their way.

For both Rivers and Cutler, their age may very well play a part in their level of maturity, but I can tell you that it was not fun watching either of them yell at officials, and sometimes their own teammates.  Chicago is a ruthless sports town... the fans are fanatical, and all of the professional sports here have fans who can get downright nasty when they feel disrespected.

Ditka on the subject:

"The worst thing that you could ever do in this city is come in here and be a complainer or a whiner," Ditka said. "If you do that, you've got a problem. So I think if he comes in here and shows that he's the leader of this football team ...

"You'll find out a lot when the pressure's on," he said. "We'll find out once the season starts, when things are either going good or not so good, you find out how people respond to that."

Since Cutler has come to Chicago, of course I have become subjectively more optimistic about the impact he will have on this football team.  I hope beyond hope that he is not only able to win a bunch of football games, but also is able to grow into a mature football player, and more importantly, be a great teammate.

Like Ditka says, if Chicago remains a run-first team, Cutler's main strength will need to change from being a great passer into a great leader.  And that is the part that concerns me the most.