Share All sharing options for: NightLink: Impact Players in the NFC North 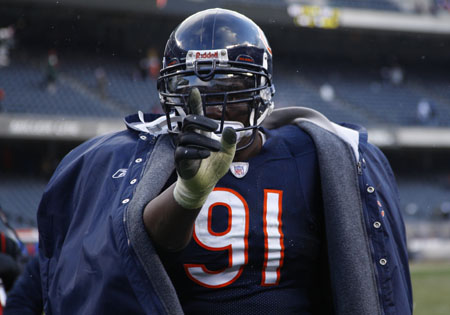 If you were asked who you thought would need to step it up the most for the Bears this year to make a serious push for the NFC North title, who would you think of?  Many believe it starts and ends at the QB position, and many think it is ILB.  Some could argue the RB, or even the LT position.  But, this writer believes hat the key to the upcoming Bears season is Tommie Harris.

The Bears were subpar on the defensive side of the ball in 2008. Despite the fact new quarterback Jay Cutler(notes) has been getting all the attention this offseason, if Chicago wants to compete for an NFC North title, it will need production from its defense, especially Harris.

Although the Bears were fifth in the league in ’08 against the run (93.5 yards allowed per game), they were 30th against the pass (241.2 ypg), and that can be attributed to the lack of a pass rush from their front four. As I’ve written before at the NFP, Tampa 2 defenses such as Chicago depend on a solid push from their front four, which allows the secondary to keep receivers in front of it and limit the explosive plays in the passing game. Harris, although he contributed five sacks in ’08, needs to return to the dominant form he had during the Bears’ Super Bowl run in ’05.

He has the ability and talent to be a Pro Bowler when he’s healthy. Chicago brought in new defensive line coach Rod Marinelli – the former head coach in Detroit who’s considered one of the best teachers in the league, for a reason – to push Harris and the entire front four. Cutler or not, this ball club needs to play better defense to win games, and it starts up front.

To an extent, I'd agree with him.  So much of our defensive misfortunes last season, whether it was Urlacher's diminished production, or the coverage "problems" in the defensive secondary, could be attributed to the poor pass rush from our front four.  But, how much of that was poor coaching is also questionable.

Another "impact player" that could really make a difference this season is Devin Hester.  We should certainly see increased receiving numbers from him with the addition of Jay Cutler, but I also think that Hester could contribute to a huge degree in other aspects.

For example, punt return; regardless of whether he will take any punts all the way to the end zone, his mere presence, as we have seen in the past, can cause complete strategy changes from opponents.

He will also draw plenty of double-teams when he is split out wide, opening up single coverage on the other WRs.  And we certainly can't overlook the possibility of him getting behind the defense, and having Cutler hit him 60 yards in stride.  Maybe Hester is the sexy answer, but he is my pick for impact player this year.  He is certainly the most dangerous player we have.

The other impact players, according to the article, in the NFC North: