Share All sharing options for: Angelo Realistic About Jay Culter 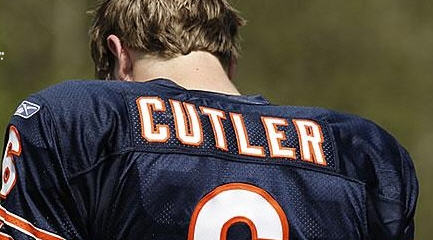 95% of Bears fans would say that when we traded for Jay Cutler, we traded for a shot at a Super Bowl in a couple of years. Maybe that is true and maybe not, but don't blame Jerry Angelo. He is the most down to earth person when it comes to what Cutler can do for the Bears.

He knows that the offensive line will have to be better or the trade will be for naught. He knows Devin Hester will have to find his playbook or all the talk of Cutler's superhuman arm will be forgotten. He knows the playcalling better improve to match Cutler's ability. He knows that if the defense is as bad as it was last year, Cutler will suffer as did Kyle Orton in some very painful defeats. What Angelo's banking on is that Cutler will shake off the late-season woes of 2008, take advantage of the Bears being better in all the aforementioned areas, and not just make the playoffs - which they could have done by keeping Orton - but go far in the playoffs instead. And that's possible.