Share All sharing options for: What Will Kevin Jones Bring To 2009? 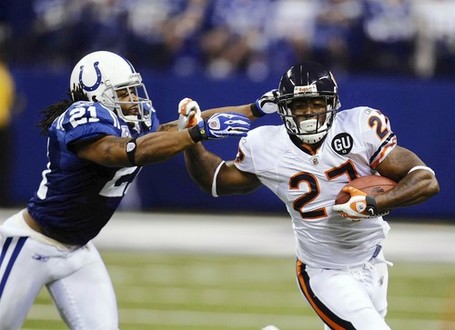 The Bears are determined to get former Detroit number one draft choice Kevin Jones more involved in the offense this year, and for the longevity and health of Matt Forte I hope Jones can be productive. Running back tandems are the norm in today's NFL. More teams are looking for that guy to split carries with, the Smash to the Dash, the Lightning and the Thunder, or the Earth to play off the Wind and Fire. In the Bears 2006 Super Bowl season Thomas Jones split carries (about 65% - 35%) with Cedric Benson. In that same year the Super Bowl Champion Colts had a 55% - 45% split between Joseph Addai and Dominic Rhodes. I'd be happy to see the 2009 Forte / Jones split somewhere in the 60% - 40% range.

Some teams are forced to get more backs involved due to injuries, but ideally splitting time among 2 or even 3 backs will keep everyone fresh and healthy. Last year Kevin Jones had only 34 carries, which was second to Forte's 316. Not a very good ratio, in fact Forte was on the field for 84% of the Bears offensive snaps. Dude needs a breather!

What could a healthy K. Jones bring to the party? His rookie year he averaged 4.7 yards per carry while going over eleven hundred yards. His 3rd year in the league he caught 61 balls out of the backfield for over five hundred yards. When healthy he's been able to produce, (the key words there of course are "when healthy"). He missed one game his rookie year with an ankle injury. He missed three games in '05 due to an elbow injury. In 2006 he suffered a season ending foot injury against the Vikings and missed the last 3 games on the year, but in his 13 games he had over 1200 yards from scrimmage. In 2007 he started the year on the PUP list recovering from his foot injury, but did make it back for week 3. Then on Dec 23rd of ‘07 against the Chiefs he left the game with his most recent injury, a torn ACL of the right knee.

Is Jones injury prone or unlucky? I tend to say the latter of the two, because none of the injuries are related. Is he soft? I doubt it. His two season ending injuries were extremely severe (the ACL tear and a Lisfranc fracture of his foot) and he fought back real hard to recover from the foot injury just to play that season.

These days it's pretty common for athletes to return in a year's time from a torn ACL, but for a running back to fully get back the acceleration, the cutting, the stopping and starting, and for him to be able to strengthen the knee to withstand the rigors and punishment of an NFL season simply takes more time. All reports were that Jones looked like a new player during OTA's.

We're talking about a back that was the #1 rated prospect out of High School by several recruiting sites, a nationally ranked High School sprinter in the 100 and 200, and a 1st Team All American at Virginia Tech. Jones, at 6' 225, is built a bit stockier than Forte and may get some of the short yardage carries (no more McKie please). Jones runs a bit lower through the hole than Forte and will give defenses a different look. Both can be viable options as receivers (some screens please), and both are adept in picking up the blitz.

I'd love to see Jones get around 150 carries, with Forte about 250, and yes a little Garrett Wolfe sprinkled in every so often. For some perspective on running back tandems, Carolina had DeAngelo Williams at 273 attempts and Jonathan Stewart at 184. The Colts' Addai and Rhodes split again with each a bit over 150. The Titans Chris Johnson had 251 and LenDale White 200. Even the Falcons workhorse Michael Turner and his league leading 357 attempts was spelled from time to time by Jerious Norwood's 95 carries and 36 receptions.

The Bears have Jones for two more years, he'll only be 27 when the season gets going, and with a limited workload he could be very productive. With him and Forte well rested throughout the season, the Bears truly can "get off the bus running."