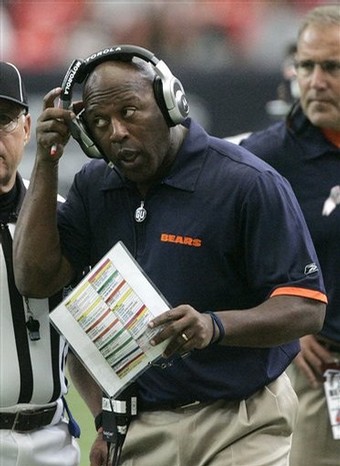 Notice I'm putting the onus on his new coordinator duties.  I'll give Lovie credit for realizing his buddy Bob Babich was in over his head, he just should have caught on before all 16 games were played last year.  By calling the defensive plays Lovie Smith is putting himself on the chopping block.  If the Bears can't get their defense back to a top unit, the blame will fall squarely on him.

Lovie will no doubt expect his defense to be able to play their Cover 2, as it is their defensive identity, and leave the blitz happy days behind.  One thing he'll need to identify is exactly how much the league has caught up to what the Bears do.  Will he add some wrinkles to the D?  Will he be able to think outside the Cover 2 box?  Will they be able to disguise some of their base sets in creative ways?  Some experts say the days of using the Tampa 2/Cover 2 as a base defense is over.  I feel if you have the right personnel (as the Bears do) and aren't too stubborn to tweak things up a bit, you can still run the D effectively.

As I said with #8 on my list, Rod Marinelli, the coaches can only do so much, the players have to make plays, but with Lovie putting himself so far out there he needed to be on this list.  (Just not in the top 5)

Bottom line is if the Bears defense fails, Lovie, and only Lovie will held accountable in the court of public opinion.